Is the cartridge compatible with your console? Have you syntonyzed your TV to get rid of glitches? That’s right, we went back to the 80s for our latest project with All in Pixel. And boy, did we have fun – and issues!

Retrogame Issues takes us back to a decade of big hair, saturated colours, 8-bits and local arcades. When game stations were loaded up with multi cartridges, TVs took ages to tune and setting up a new video game would require MacGyver-like skills.

The short film explores the excitement and limitations of that era, going through the typical video game issues of that time and taking the fans of today on a powerful, nostalgic trip. The entire premise of the film is based on the very game-like nature of these limitations – often enough, actually managing to play the game would become a game in itself, with challenges to overcome in order to get to the next “level”. This, in turn, would lead to some out-of-the box thinking, providing home-made solutions for technical problems and proving, once again, that limitations often foster creativity.

Our creative approach was based on the same principle: we used limitations as a means to increase creativity and designed the whole film in PETSCII art, with nothing else but 8-Bit character sets used as graphic elements to illustrate and animate the story. 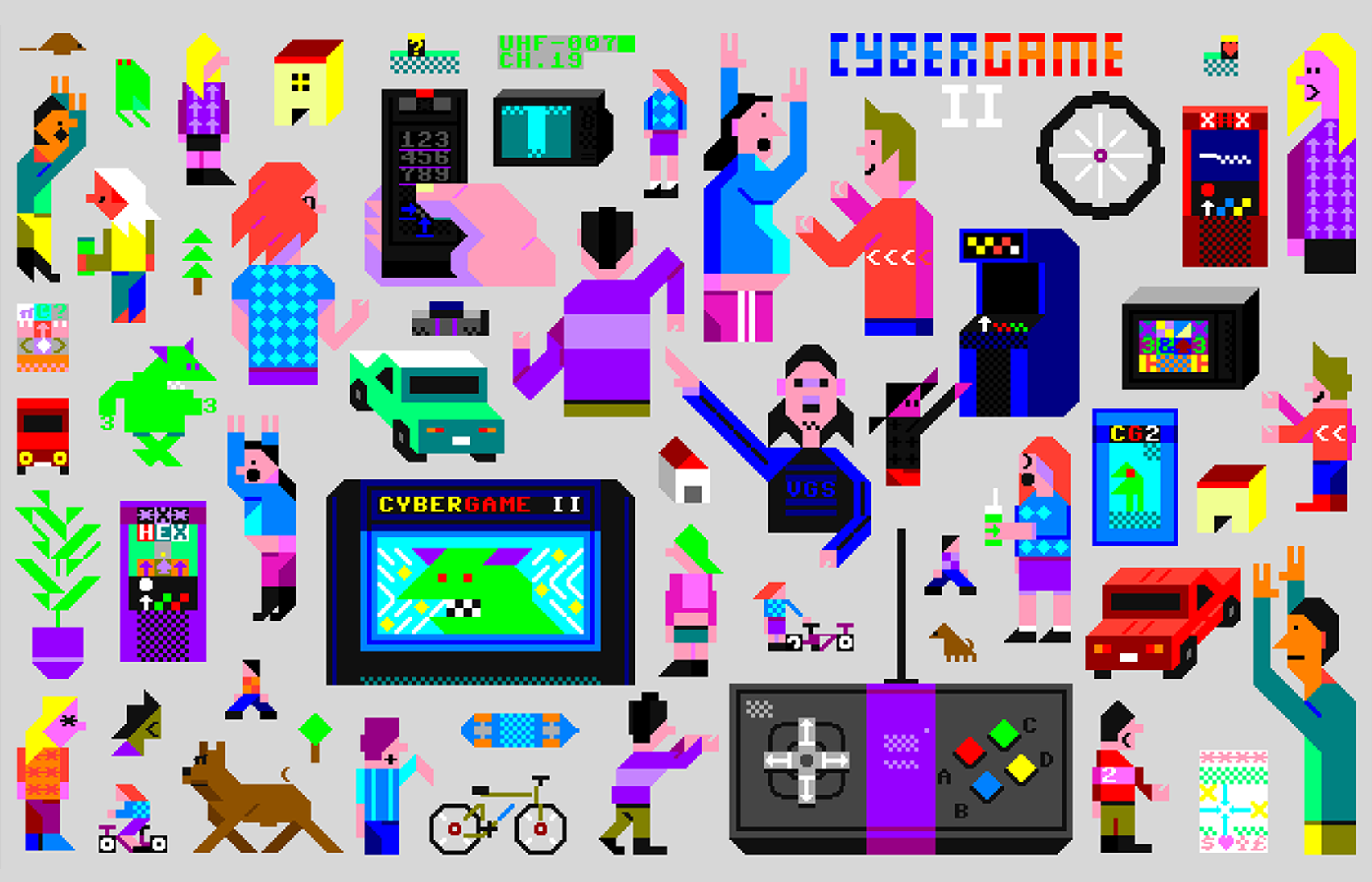 Originally a type of character encoding used on Commodore’s 8-bit computers, PETSCII contains a rather extensive set of graphic symbols and allows the use of colours (unlike the more popular ASCII), but it’s at the same time a lot more limiting than using pixels, for example. With this type of “text art”, everything lies in the details, with small geometric shapes building up an image on a fixed grid, like in a retro digital mosaic: as you take a closer look, you’ll notice how the letter ¨C¨ becomes a thumb nail or realise that the monster’s hand is made out of the number ¨3¨, for example. Just like with old video games, we saw limits as opportunities, working with a few elements to create fantastic worlds and explore an old graphic language in a contemporary way.

Story wise, we kept to a game within a game approach: we see our main character eager to play the hottest new video game in town and how she encounters every typical issue while trying to finish the game on her old console.
The narrative structure resembles a video game with story chapters instead of levels to enhance the whole experience: we see every issue and its solution building up in a retro tutorial within the main story, as our character manages to solve each problem to get to the next one, just like in a video game. 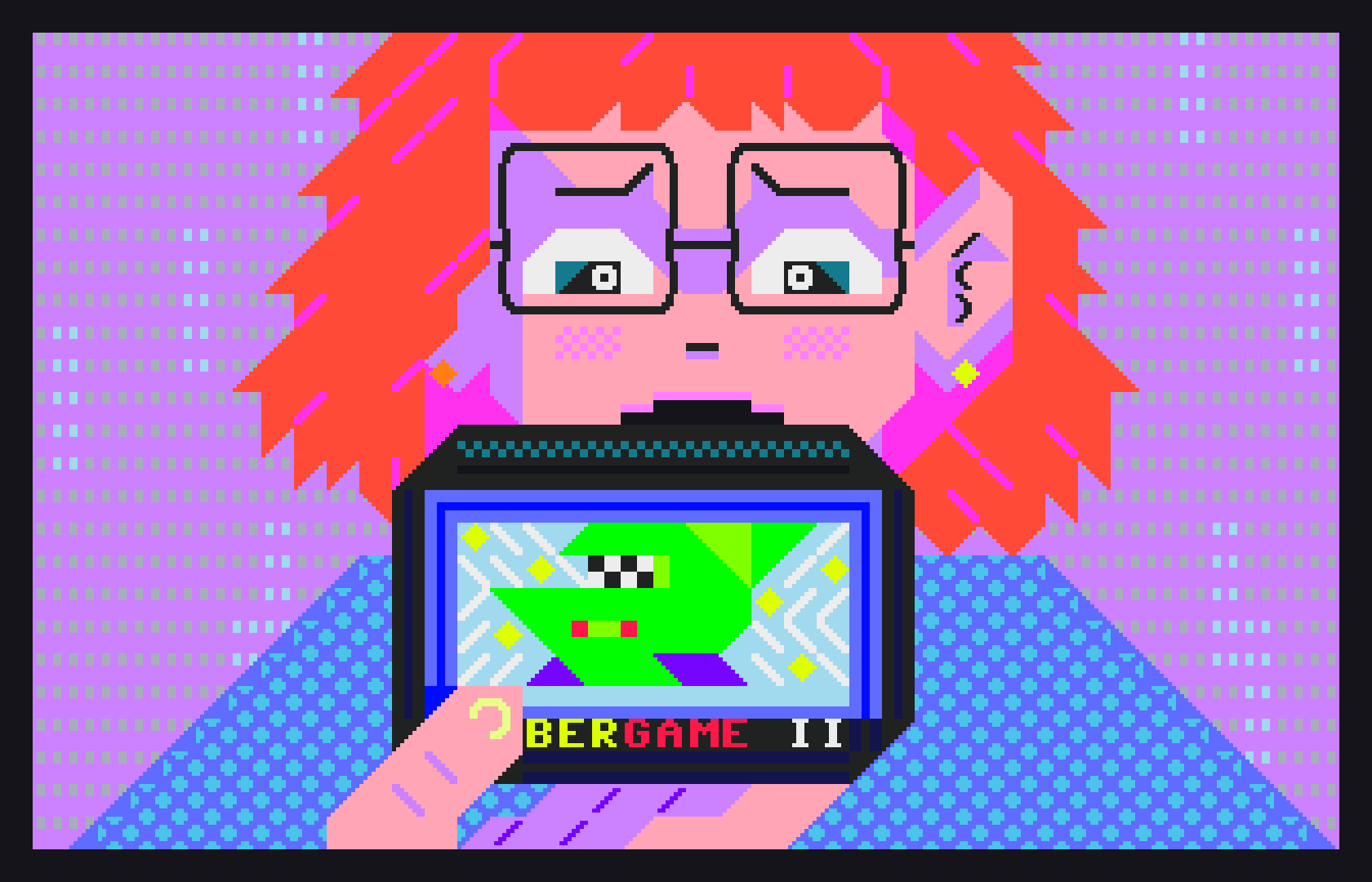 Visually, the film pays homage to the 80s video game aesthetic, using the PETSCII art style to transport the viewer to that decade. This low-fi style also adds a layer of subtle humour to the film, where graphic elements can be simple and, yet, so expressive and straight forward, at the same time.

Playing with the PETSCII geometric limitations allowed us to create more interesting shapes and patterns: we created geometric shapes out of built-in symbols and letters available in the PETSCII character set, and added colours and 8-bit mapping techniques to create depth and texture. Character dialogues were included visually in the compositions in order to add more expression and we used frame by frame animation in PETSCII with the help of the LVLLVL software to bring everything to life.

In order to push this video-game aesthetic even further, we added text mosaic glitches between scenes to give the animation a fluidity that’s reminiscent of playing an old school video game.

Because, after all, nothing beats the feeling of finally getting to the next level – only to have your dog accidentally unplug your cable.